The idea behind the “TU Go” app is simple — using your data connection (WiFi/broadband or 3G [and probably Edge]) to make and receive calls and texts, from your O2 number, billed to your O2 account (or inclusive allowance where applicable).

Why would you want such a thing?  Well with mobile phone reception in the UK still many years behind other countries (my area has literally only just been upgraded to Edge!) making and receiving calls and texts can be difficult in rural areas.  With the TU Go app, customers are able to send and receive calls and texts using their home WiFi for example.

Vodafone’s Sure Signal had previously your only option in this situation, however there are a few down-sides to this (except for only being available on Vodafone as far as I’m aware) that the device will only provide coverage to registered SIM cards, can only handle a maximum of eight of these, and in my experience  the range seems to be less extensive than WiFi.

And the brilliance of the app means you can make and receive calls and texts from devices you wouldn’t usually be able to, such as a PC, iPod Touch and iPad1.

Other services such as iMessage for iOS (Apple) devices, and WhatsApp and Skype 1 (available on many platforms) is that the receiving user has to also be using the same system.  TU Go breaks out into the ‘real’ mobile network, allowing you to or text any number that you would normally call or text from your handset.

So why do I feel it has been released too early?

Well, I have found numerous problems.  O2’s Twitter team asked me what problems I was having, and being unable to list them all in 140 characters, I decided to write this article.

Firstly, let me state that I have tried the TU Go app on my iPhone 4S, iPad 3 and Windows 7 PC.  Also, without wanting to sound big-headed, I want to add that I’d consider myself to be fairly-highly computer literate, with a degree in Computing Science and running an Web-development and IT support company, specialising in Web-application development.

The most major problem I have with TU Go for iPhone, is that it seems to be in competition with the iPhone itself when receiving a call.  If the iPhone wins (assuming you have decent signal) then great — you can receive the call as usual, no problem.  But if the app gets there first and rings, it blocks the iPhone from ringing, so you have to answer the call though the app.  Here begins the problem.

Firstly, before you can answer the call, you will have to very quickly swipe and unlock your iPhone, then wait for the app to open.  This takes much longer than usual when answering a call, so be sure to be very quick before the call is grabbed by your voicemail!

Assuming you were quick enough to grab the call, you place your iPhone to your ear.  The iPhone’s proximity sensor detects this, and whereas usually it means it will turn off the display, it activates Siri’s “Raise to Speak” feature, cutting out the call.  I am yet to successfully answer a call using the app on my iPhone.

When receiving a text message, you will receive the message twice.  I suppose this cannot be helped, but it’s an annoyance nonetheless, as you will need to go through the app and mark each one as read — on every device you use as it does not appear to sync across devices like iMessage for example.

On the iPad I’ve had issues where, despite receiving a push notification of a text message, the app does not show it, even when killed and reopened.  I’m also yet to receive a phone call on my iPad.

As of yesterday, the iPad version seems to have entirely lost sync with the TU Go service altogether   It is currently only showing two test calls to voicemail (from my Windows PC), which were made the day before the screenshot was taken, not the same day as shown in the app! And again, no trace of the many text messages I have subsequently received (and correctly displayed) on the iPhone version. 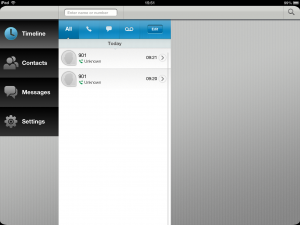 As with the iPad version, the PC program did not ring when I tested it.  Also, the PC program does not come as a simple, single .exe installer file.  I think this would baffle most average PC users.  Installation was a very slow and painful experience, requiring me to restart my PC halfway though after downloading and installing various bulky dependencies.

Another problem with the PC version is, unless you know your contacts’ numbers, you’re not going to be able to text or call them! Where are your contacts?  As I use Google Sync (and many Apple users will of-course use iCloud) to sync contacts across devices, this isn’t so much of a problem with my iPad, but certainly is with my PC.

In summary the entire platform to me seems far from finished (and yes I’m aware the PC version is in beta, but I would argue the system still feels more like it ought to be in the alpha stage of development!), with numerous problems.  A great idea, but not very well thought out, executed and tested.

1. Of course services like Skype exist which will allow you to make calls and send texts, however you will need to purchase separate credit↩