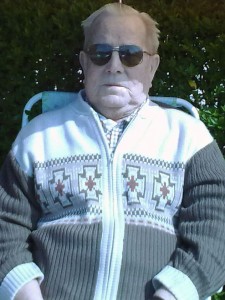 My grandfather passed away Thursday evening (27th February 2014), aged 84, at the Norfolk and Norwich University Hospital.

He was admitted with an inflamed pancreas which was fairly quickly resolved, but he unfortunately went on to contract an infection of MRSA in his legs, another infection in his lungs as well as problems with his kidneys.  Granddad was also showing the early signs of dementia, which seemed to worsen during his time in hospital.

I visited him yesterday to say my final goodbyes, and I’m very glad I did. He looked just like my granddad.  I mean, completely calm, relaxed and comfortable — something we unfortunately hadn’t seen in him for some time owing to his ill health.

Born on 15th April, 1929, just a very short walk from where he spent the rest of his live, my grandfather began work as a farm boy, working the land on which the Norfolk and Norwich is now built.

He later joined British Telecom, erecting telegraph poles. In fact, no matter where we were in Norfolk, he claimed he had erected the poles — something I was unsure of the validity, but I think there are only one or two poling units covering the area, so it could be true!

Following The Great Storm of 1987, which saw widespread devastation across the south of Britain, my grandfather fought tirelessly to replace any felled telegraph poles to get the telephone network back up and running.  Of-course, people didn’t have mobile phones as a back up, so the restoration of the telephone network was a major priority.  This work was recognised by BT, who presented him with an engraved, crystal tumbler.

As a young boy, I always spent a lot of time with my granddad. Once retired, granddad would drive to ours on Friday afternoons, often picking my brother and I up from school.  Some of my earliest memories I have are hanging out of my bedroom window, looking for granddad’s car to pull up.  My grandmother would arrive on the bus after finishing work at the old Nestlé chocolate factory in Norwich, on the site of what is now the Chapelfield Shopping Centre.  I would then, more often than not, pack a very small suitcase I had, and stay with them for the weekend.

First thing on a Saturday morning, I’d badger my grandmother into making buns with me — usually so early that they were cooked before granddad was up!  Then once granddad had had his first cup of tea and a shave, we’d all jump in the car to the West Earlham shops, where, without fail, granddad would buy me a ¼ of clove drops!  I still love those!

My granddad always had a fascination for nature, and particularly birds.  When he would take me for walks around Earlham Park, he would always try, largely without success, to teach me the name of the birds we could hear. Many years later on, as a student at the University of East Anglia, I used to park my car at my grandparents’ and have a coffee with them before walking on to campus. We’d often then stand at the window watching the birds circling overhead, or feeding on the wall, passing the time before I had to leave.

Granddad, we shared many happy times.  Fond memories that will never leave me.  You always were somebody I looked up to, and always will be.  For now, goodbye.  I hope to see you again some day.  I love you.

Death is Nothing at All

Death is nothing at all.
I have only slipped away to the next room.
I am I and you are you.
Whatever we were to each other,
That, we still are.

Call me by my old familiar name.
Speak to me in the easy way
which you always used.
Put no difference into your tone.
Wear no forced air of solemnity or sorrow.

Laugh as we always laughed
at the little jokes we enjoyed together.
Play, smile, think of me. Pray for me.
Let my name be ever the household word
that it always was.
Let it be spoken without effect.
Without the trace of a shadow on it.

Life means all that it ever meant.
It is the same that it ever was.
There is absolute unbroken continuity.
Why should I be out of mind
because I am out of sight?

I am but waiting for you.
For an interval.
Somewhere. Very near.
Just around the corner.